Updated on August 19, 2021 By Jackie Sills-Dellegrazie 20 Comments
This post contains affiliate links which earn a small commission at no extra cost to you. Please read my Disclosure and Privacy pages for more info. Additionally, The Globetrotting Teacher has partnered with CardRatings for our coverage of credit card products. The Globetrotting Teacher and CardRatings may receive a commission from card issuers. 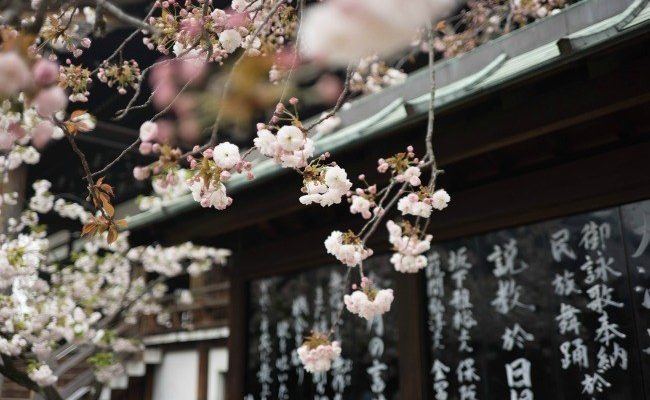 And since 100k is such a nice, round number, let’s see where they can take us! 😉

As I mentioned in the last post, this series is for thrifty travel hackers who want to squeeze as much from every mile and point as possible. I’m not earning thousands of miles as a business traveler on my company’s dime. (Lol! I can barely get reimbursed for classroom supplies I purchase.)

This post is for you if you’re an organized planner who carefully meets minimum spend requirements and maximizes bonus categories to get the most value for every dollar spent. You’ll find this post useful if you think business class is a special occasion splurge and want ideas focused on value-packed economy class awards for everyday travel.

How to Use 100k Ultimate Rewards Points Part 2

As I explained in Part 1, the suggested destinations come from a U.S. News and World Reports list of the  25 best places to visit according to trends, user votes, and expert opinions. All the destinations were chosen for their classic sights, experiences, food, and culture which are popular with many travelers.

How to Use 100k Ultimate Rewards Points Part 2 takes a few more of those destinations and shows how to get there.

Remember, you can transfer your UR points at a 1:1 ratio to all of Chase’s 11 travel partners. Chase also has a travel portal where you can book travel plans directly. It’s always smart to compare options for the best value. Yet, even with the 50% bonus on Sapphire Reserve UR points, you’ll typically get more for your miles and points by transferring them to a travel partner.

Part 1 of this series featured 7 European cities including Paris, London, and Budapest. There were also redemptions ideas for idyllic South American destinations like Patagonia.

The October 2016 United stopover changes are hitting itineraries to and within Asia especially hard. That’s because United breaks up Asia into 4 separate regions. The changes now limit stopovers to being within the same region as your final destination. This change is downright devastating for itineraries including Japan. The reason being, United has Japan in a region all to itself which means the only possible stopovers would be for inter-Japan flights.

For travelers flying to Tokyo’s Narita Airport from Los Angeles, UR transfer partners British Airways and Singapore Airlines make the most sense. 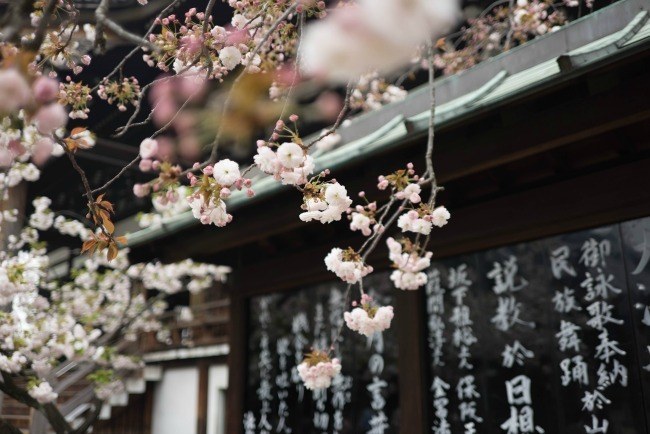 In the above screenshot taken while searching on British Airways, both flights selected are economy flights flown by Japan Airlines. While the search results below show the outbound flight changed to an American Airlines operated flight. Note the dates of the flights did not change. It may also be helpful to know Japan Airlines has a route from San Diego to Tokyo’s Narita Airport, as well, for 60k Avios + taxes and fees roundtrip.

Singapore Air also has a route from Los Angeles to Tokyo’s Narita Airport for 65k miles roundtrip. Unfortunately, the Singapore Airlines 15% discount shown below is a thing of the past!

You can see the roundtrip number of miles are shown. You can also add 1 pre-selected stopover to roundtrip Singapore Airlines Saver awards for free and up to 2 additional stopovers for $100 each. Using the included stopover adds value over the classic roundtrip British Airways award discussed above.

Hong Kong and Bali are also featured on the U.S. News and World Report’s list. Fortunately, both destinations are in United’s South Asia region.

You’ll be able to make use of the free stopover included in this 80k-mile (+ about $80 in taxes and fees) roundtrip award. This is one of the best ways to maximize United miles.

On the map below, you could travel from Newark Liberty Airport (EWR) to Hong Kong. You must stay in Hong Kong for more than 24 hours because it’s acting as your stopover. When you’re ready, you continue on to your final destination, Bali (DPS). Use United’s multi-city award search tool to piece together this itinerary.

Explore Hong Kong’s chaotic street markets and take the tram to Victoria Peak for a view overlooking the city. When you’re ready to relax, jet off to Bali to find that Zen feeling at the island’s beaches and temples. It will be a sad day, but eventually, you’ll return to New York’s JFK to finish your trip.

One last possibility to consider if Bali isn’t part of your travel plans is flying on Singapore Airlines from San Franciso. Remember, you can add a pre-selected stopover chosen by Singapore Air for no extra cost.

1. Travelers from the east coast of the U.S. can book a 70k roundtrip award flight to Tokyo’s Narita airport using United miles. To add value, include an inter-Japan stopover like Osaka to your travel itinerary. 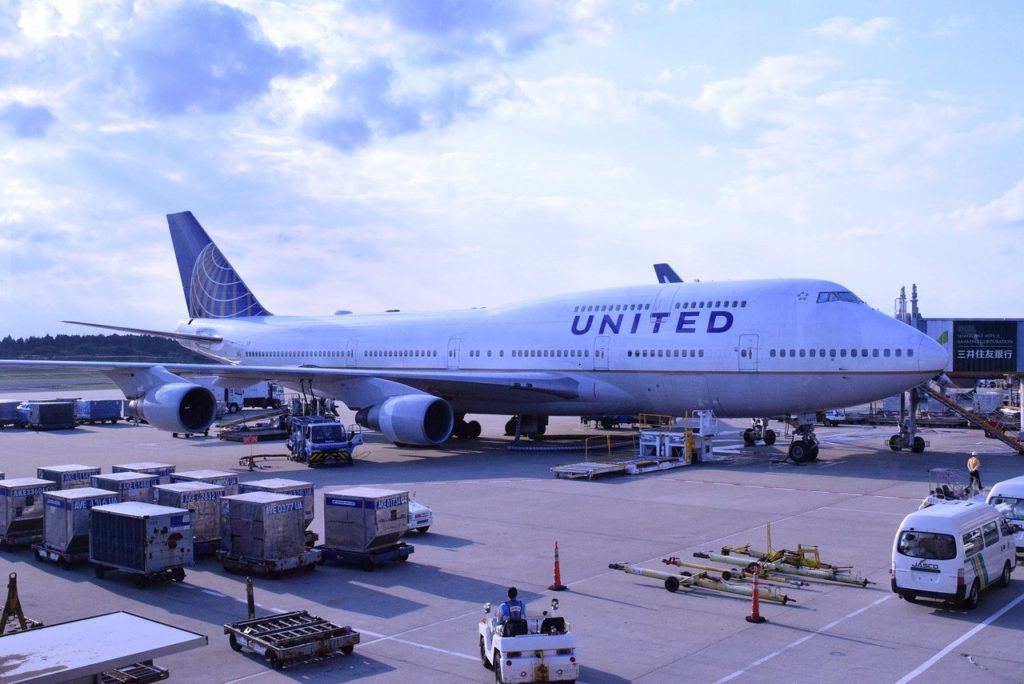 2. Successful travel hacking is always about being flexible and even thinking outside the box from time to time. Perhaps positioning yourself on the west coast makes sense to take advantage of the Singapore or British Airways options above.

Southwest flights can be booked with UR points by transferring them to your Southwest Rapid Rewards account, as well as through the Chase travel portal with its 50% bonus on UR points earned with the Chase Sapphire Reserve. Southwest Companion Pass holders could find this option particularly helpful.

It should come as no surprise that Australia also made the U.S. World News and Report’s list. The top Australian destinations listed are as follows.

Award flights to Australia and New Zealand are some of the hardest redemptions to book from the U.S. It’s true that if you plan to fly economy to Australia you’ll (clearly) have more availability than those who are looking for business class or first class seats. However, in general, you need to plan well in advance (think as soon as the calendar opens) regardless of which class you want to fly.

The easiest, perhaps most obvious, economy award seat to Australia is with United. You can fly to the land down under for 80k miles roundtrip + taxes and fees. You can add value to your itinerary with a stopover within Australia to another city like Cairns, Melbourne, or Brisbane. United also includes New Zealand in the same region, which makes a stopover there possible, as well.

United also allows 2 open-jaws on roundtrip award flights. Together with the stopover, your Australian itinerary can pack terrific value. The itinerary below includes 1 stopover and 1 open jaw. You could depart from Chicago and stopover in Aukland, New Zealand.

After which, continue to your final destination, Sydney. When you’re ready to see the Great Barrier Reef, book a cheap paid one-way inter-Australia flight. Skyscanner showed prices as low as $85. Depart from Cairns for your return trip to Chicago. 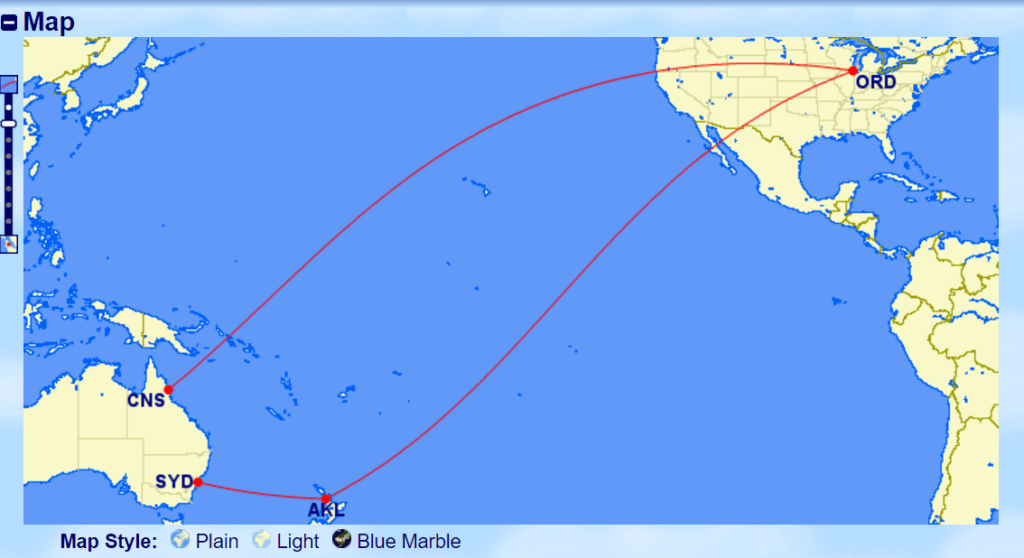 1. Australian award flights can be tough to book. You might have to justify paying more miles to find that elusive award ticket, especially if you’re counting on somewhat specific travel dates. Virgin Atlantic is notorious for their high taxes and fees on award tickets.

However, they don’t impose those high fuel surcharges on many of their partners. This is true for flights operated by partner Delta. Air New Zealand, another Virgin Atlantic partner, has relatively low out-of-pocket costs for taxes and fees. While partner Virgin Australia imposes surcharges on international flights.

Roundtrip economy award tickets are priced between 80k-100k miles. Stopovers and open-jaws aren’t allowed, but these partners add valuable alternate possibilities when trying to use miles and points to get to Australia.

Search United for Air New Zealand availability and search Delta for Virgin Australia and Delta. Once you find the flights you want, call Virgin Atlantic with all the flight information to book.

So what do you think? How would you use 100k Ultimate Rewards Points?

Hey, I'm Jackie, founder of The Globetrotting Teacher and a 15-year classroom teacher who couldn't resist taking my own extended field trip...so far 5 continents, 30+ countries, & nearly every U.S. State! Luckily, my miles and points expertise has gotten me where I want to go and my trip-planning savvy has made the world my classroom. Travel truly is the best teacher, and so through the blog, I've made it my mission to teach others how to do the same and finally realize their travel dreams.