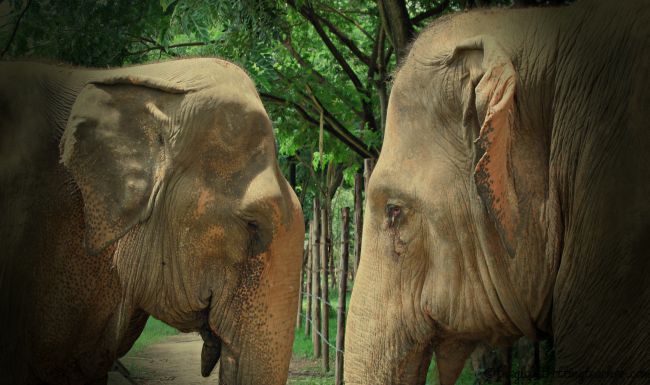 When you type the search terms “why you should not ride elephants” into a Google search, over 2,000,000 results are returned.

I’m adding to that number with this blog post.

Too many people continue to ride elephants, unaware of the abuse the elephants have suffered and are suffering. 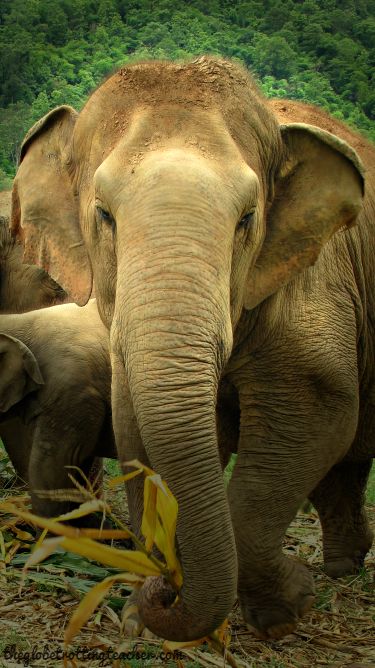 I’m an unabashed animal lover. I have a soft heart when it comes to all animals. I cannot bear to see them suffer, especially when it’s at the hands of humans. 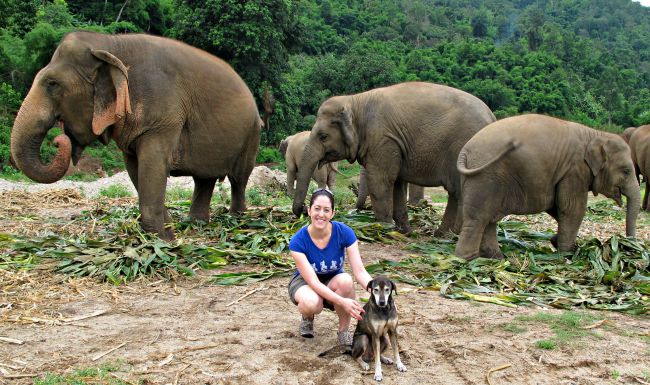 Yet, that’s the ironic part. Many people who ride elephants do it because they’re animal lovers, who want an up-close and personal experience with an elephant. It’s easy to hear about a wildlife experience, like riding an elephant, petting a tiger, or swimming with a dolphin and think how incredible that would be.

But, behind the potential excitement, an uncomfortable feeling always nagged at me. I’ve had to ask myself how it’s possible to get that close to a wild animal that would otherwise be a threat in the wild. What has happened or is happening to that animal to allow for this “incredible experience?”

In the case of elephant riding, unsuspecting tourists don’t realize what the elephant has endured/is enduring so they can ride on its back. 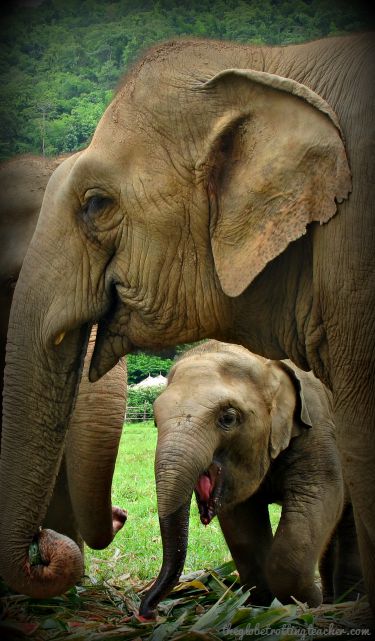 It’s called “the crush” or otherwise known as “breaking the elephant’s spirit.”

It’s during this “process” when the elephant, typically a baby, is caged, restrained, and beaten with a hook until it submits…or is broken. 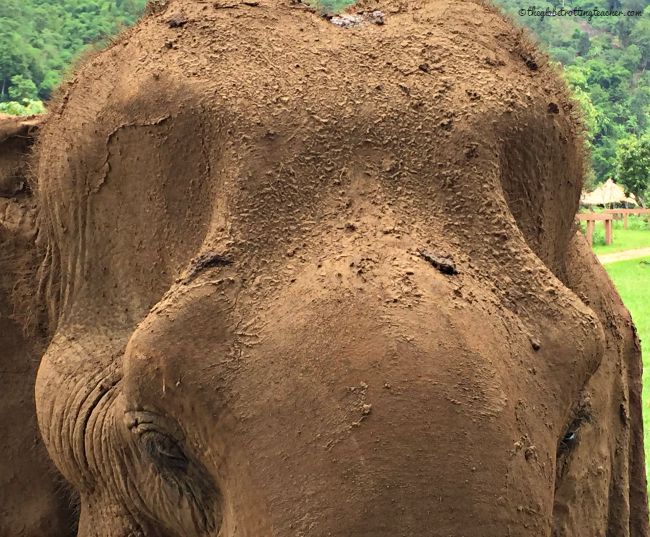 There are gut-wrenching, unbearable videos online depicting the “crush”, but the baby elephant in this award-winning photo (Graphic Image) speaks loudly and clearly.

Which elephants suffer through this process?

Elephants used for trekking (riding) through the jungle, logging, street begging, performing, and painting are usually captured from the wild as babies and subjected to “the crush.” 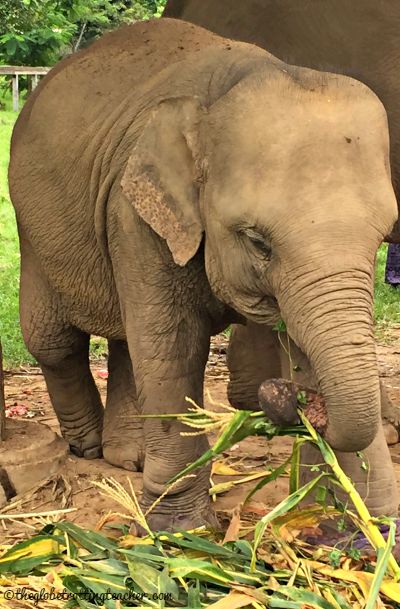 Once in these industries, elephants have to bear the use of a hook (and worse) to “correct bad behavior.” They’re often shackled at the ankles with metal restraints and made to continually feel fear.

Elephants in trekking camps can be forced to wear a chair without ever taking it off. Elephants in other tourism jobs are frequently denied food unless they perform. 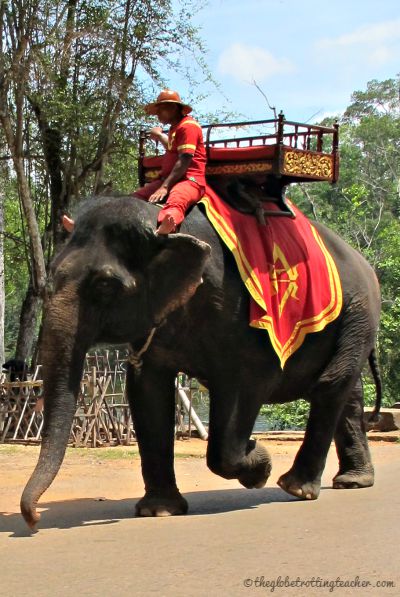 Elephant trekking is big business and money talks. If tourists continue to pay for elephant rides, baby elephants will continue to be captured from the wild and broken.

What can you do?

Spread the word! Whether or not you are traveling to Asia, you can inform others. Once people understand what has to happen in order for them to ride an elephant and the abuse that continues afterward, minds can change quickly! 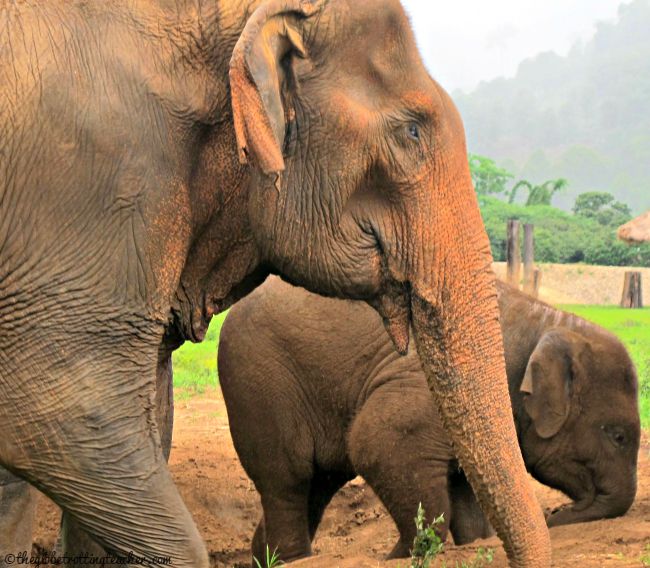 If you are traveling to Asia, Don’t Ride Elephants!

Spend your tourist money to visit true elephant sanctuaries, like Elephant Nature Park about an hour and a half north of Chiang Mai, Thailand.

This is an informative blog post by Richelle at Adventures Around Asia, where she details her visit to another popular “sanctuary” near Chiang Mai, Thailand. 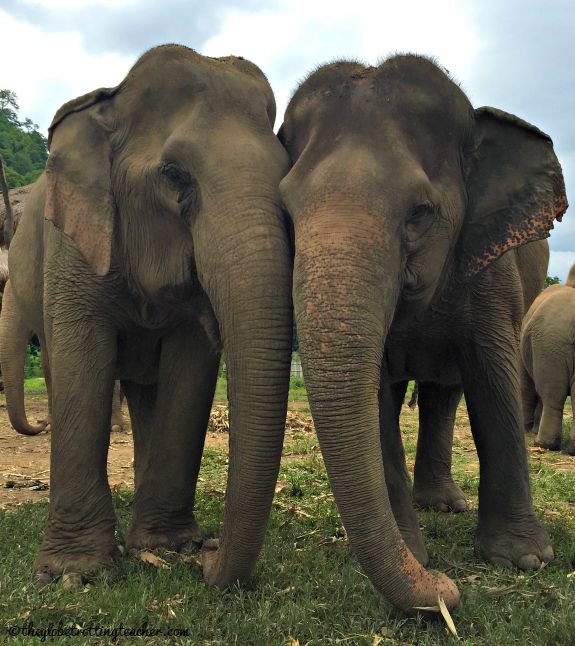 What is Elephant Nature Park?

I was lucky enough to spend 2 separate overnights there, combining for 4 full days.

Elephant Nature Park takes in abused elephants from the logging and tourism industries and provides a haven where they can live their lives freely with other elephants. 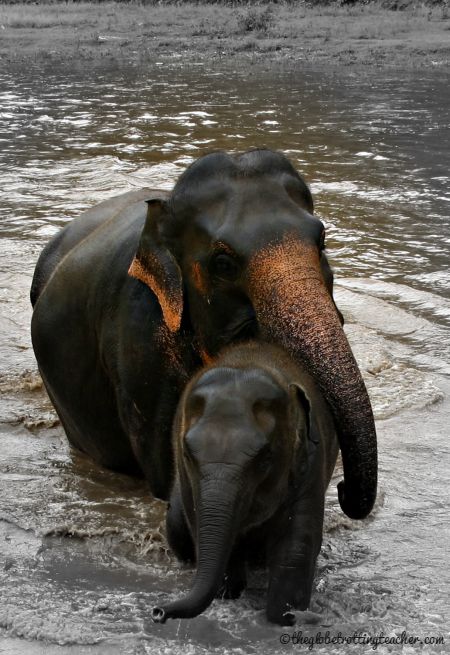 Tip: If you want to visit Elephant Nature Park, book early. By early, I mean at least a few months ahead of your scheduled visit!

Two things about the elephants at Elephant Nature Park standout.

If you’re at all skeptical about the abuse elephants suffer, a visit to Elephant Nature Park will show you, firsthand, the elephants’ physical and psychological scars.

Elephants had broken backs from wearing riding chairs 24 hours a day. They’re not meant to carry the weight of an endless stream of tourists for jungle rides day after day. 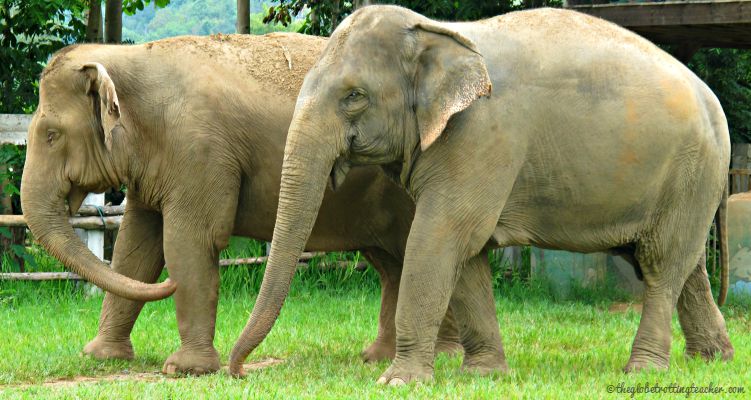 Some elephants had poorly healed, dislocated shoulders and wounded feet from wearing metal restraints around the ankle.

There were even blind elephants. Some in this condition because of the damage done by circus spotlights. I even met one poor elephant who was forcefully blinded by a former mahout (caretaker!) with a slingshot. She tried to retaliate against him for keeping her captive so the slingshot was to make her fearful and more submissive. 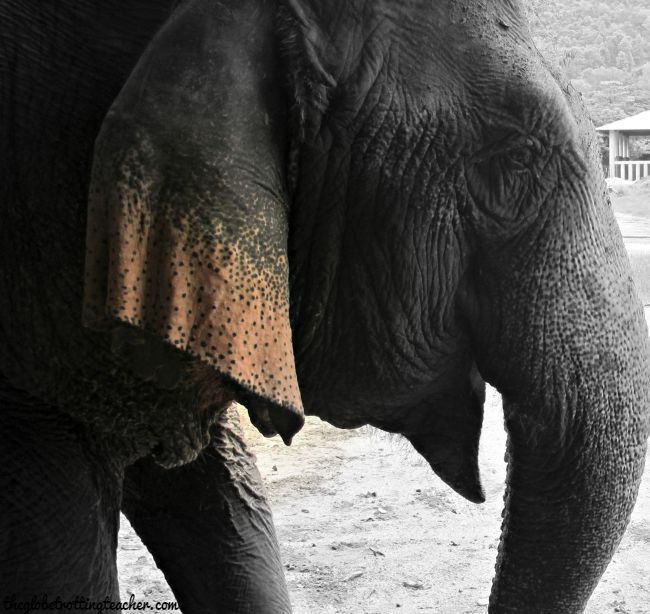 Other elephants rock and sway from psychological scars, while a couple of others prefer to remain alone (contrary elephant behavior), untrusting and fearful. 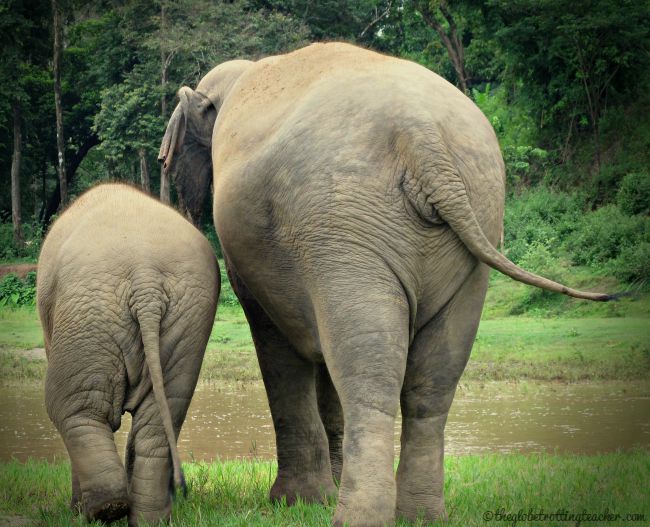 You will undoubtedly notice how happy the elephants are now at Elephant Nature Park. Not only are they being well-cared for, but many of them are also getting to “be elephants” for the first time in their lives. 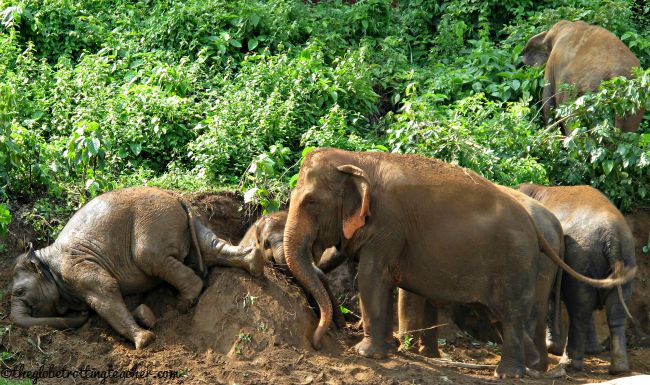 These rejuvenated elephants have formed herds who love to eat (and eat!), play in the river, roll in the mud, and roam freely around the sanctuary. 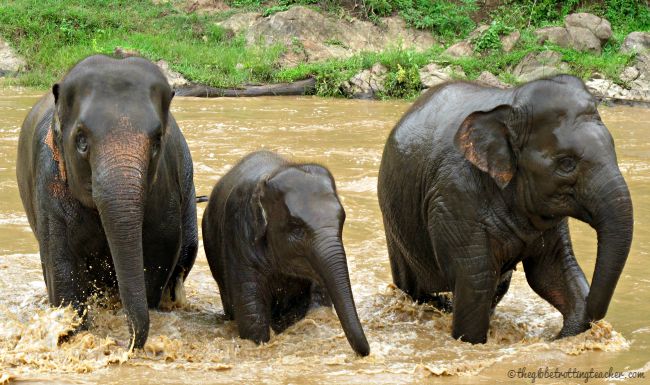 Spend just a short time observing the elephants and you will see how social, intelligent and emotional they are. They care for one another and are especially protective of their young. They squeal and trumpet to one another and touch each other’s trunks as a sign of affection. 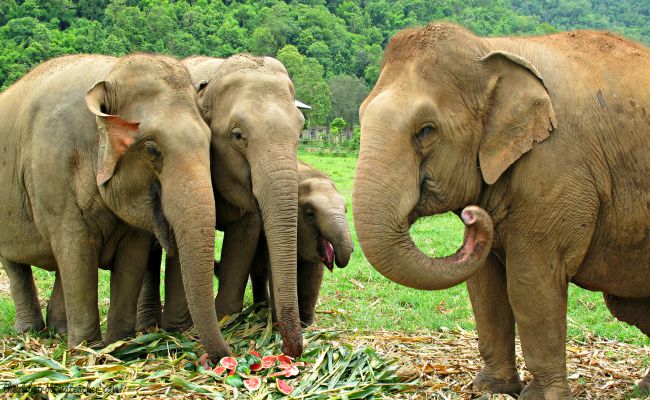 What does a visitor to Elephant Nature Park do? 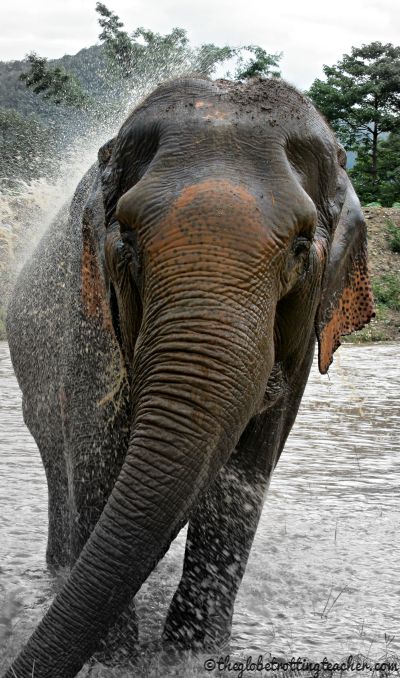 If you stay overnight, you’ll do a private elephant walk in the morning, where you and your small group will visit and observe the elephants while the park is still quiet and free from day visitors. 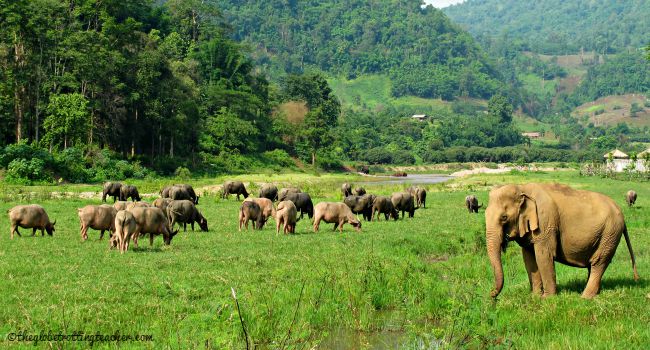 You’ll also help out in the elephant kitchen preparing food to feed to the elephants later. 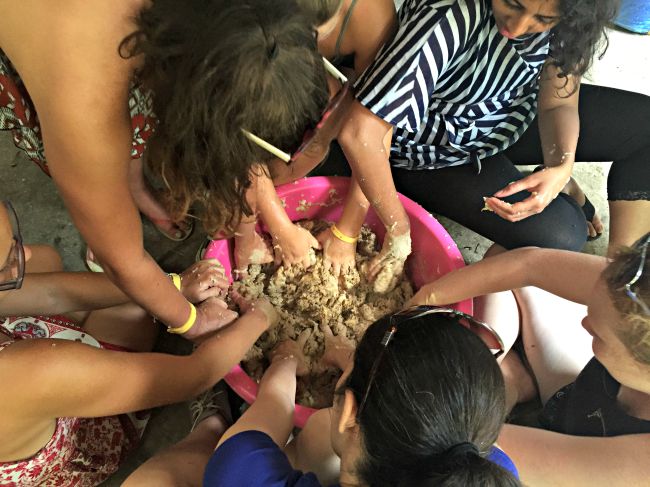 Elephant Nature Park has also rescued hundreds of cats and dogs. You can spend time visiting them at Cat Kingdom and Dog Palace. 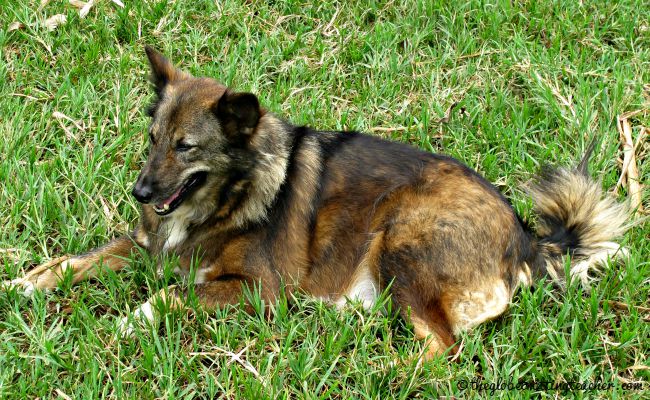 “Elephants are honest” our overnight guide, Apple, told the group. “You know how they’re feeling.”

I thrilled to have had such an immersive experience with elephants. They exhibited tangible and observable happiness and joy from living at the sanctuary with other elephants. Even more, I felt an immense amount of hope by seeing the elephants’ spirits’ returning to life and their ability to trust again. 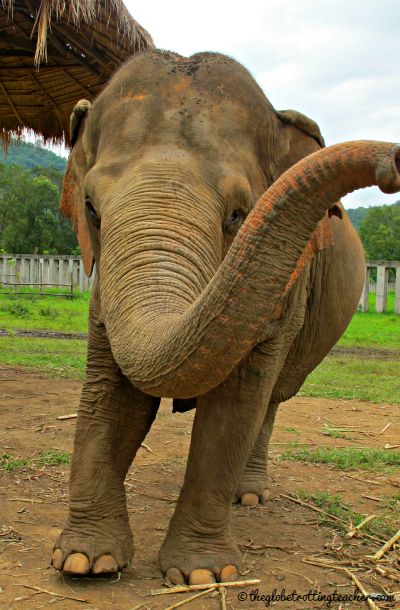 Have you had an elephant experience? Would you like to visit Elephant Nature Park?

22 thoughts on “Why You Should Not Ride Elephants”